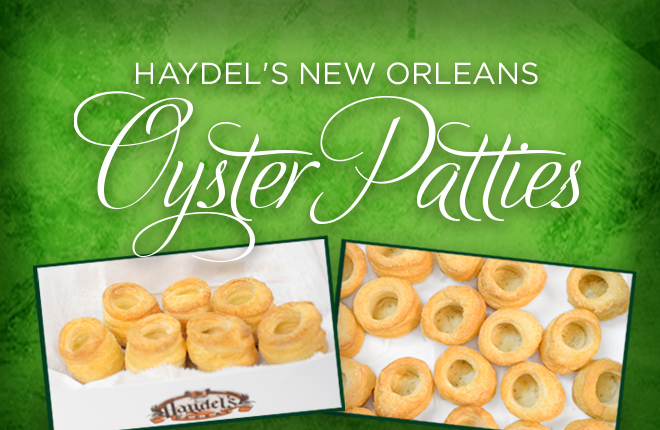 Rich, decadent, and so distinctly New Orleans while also being impossibly light, and flakey? If these little Oyster Patties aren’t a miracle – they’re pretty close. And since it’s the holidays, we’re hand making thesePattie Shells and inviting you into Lauren and Ryan Haydel’s home as they make this Haydel’s family classic.

In this city, seasons are marked not by changing leaves or an influx of tourists (they’re here all year round), but by the ingredients on our stoves and forks.

The return of oysters is the salty, briny reminder that the holiday season is officially here.

Oysters are wonderful raw. Perfect fried and piled high on French bread. And great hiding down in the murky roux of a relative’s seafood gumbo. But there is something extraordinary and delightfully decadent about a buttery, flaky cup filled to the golden brim with oyster dressing. It’s a Christmas staple in the Haydel family, and after watching this video, you’ll be able to make it a part of yours too.

Sautée onions, bell pepper and garlic in the oil. Add oysters. Cook until oysters become slightly firm. Add cream of mushroom soup, salt, and pepper. Bring to a light boil. Add bread crumbs, swiss cheese, and parmesan. Stir until melted completely. If consistency is very thin add more breadcrumbs. Consistency should be that of thick pudding. Fill a pastry bag* and pipe into each shell. Bake at 350° for 10‐15 minutes.

*If you don’t have a pastry bag fill a large ziplock bag and cut the corner to pipe filling into each shell.

Fill each shell with enough pecans to cover the bottom. Pull off hunks of brie and stuff it into each shell. It’s ok if it sticks up out of the top some because it will melt down in the oven. Top each generously with brown sugar. Bake at 350° for 11 minutes or until cheese bubbles. Serve immediately.

We’re willing to bet these dishes will become an anticipated holiday fixture that marks the changing seasons and gives your family one more thing to be thankful for.

Come grab some pattie shells and try it out for yourself – or order them here.